Strap in Evangelion fans, as we're about to look at some of the weirdest and most wonderful pieces of Evangelion merch to ever be produced. Yes, some of these are official and no, it's unlikely we'll ever stock them.

We'll take a brief look at all sorts of merchandise you can get from Japan, which is all thanks to the genius of Hideaki Anno, for creating an anime that somehow led to an entire set of garden tools being branded with Evangelion logos.

Still, without this cult-favourite, Hobby Ultra wouldn't be here. Hobby Ultra exists because some teenager bought the box set, paid an absurd amount of customs and then bore witness to one of the greatest anime series of all time.

Anyway, here are some of the more questionable lines from this wonderful franchise.

We're not quite sure what the thought process was here. Is there a big crossover amongst fishermen and Evangelion fans? Is it because Rei actually fishes whilst sat in an Eva? We're not entirely sure, but heck, you can get your very own favourite Eva unit, and we're sure the fish will appreciate it.

Fishes all around the world have been very vocal about their love for this cult anime, so it's understandable that they'd love a EVA-01 lure. If you don't have a fishing rod though, don't worry, the company has you sorted with extra accessories and even a fishing rod. Outstanding. 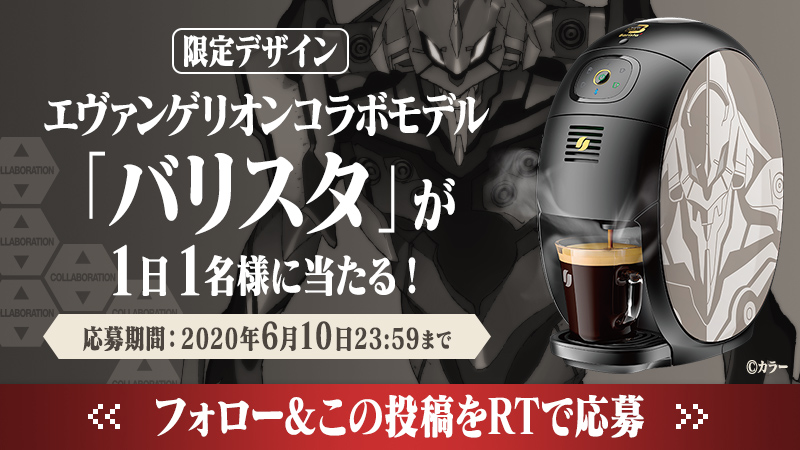 Now, the Evangelion brand has become synonymous with coffee over in Japan. You can't pick up a can of UCC coffee without seeing beautiful Kaworu on the front, but what if you had your very own official Nescafé coffee machine, with EVA-01 plastered on the side of it?

Yes please. We'll take it with milk and one sugar.

The special edition of this wonderful coffee machine comes with a few NERV logos, so you can drink a fresh cup of Gold Blend whilst you sit there, deciphering the true meanings of Evangelion. Just like we do every morning.

Huh. Well, these are something. A few years ago Bandai paired up with cosmetics brand Creer Beaute, and this was one of the results from that collaboration. They did a few fragrances, but these two stick out. Honestly though, that box design is superb - even the bottles resemble their plugsuits! 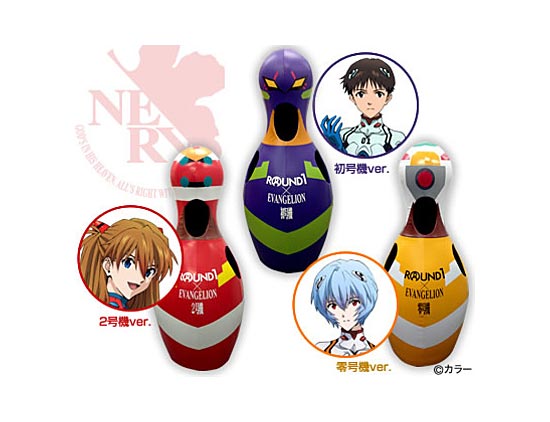 According to some sources, Round1 revamped the layout of their stores with Evangelion designs all over the place, whilst they gave away free little mascot toys and celebrated in an EVA-02 bowling pin costume.

Really though, when you look back at Evangelion and it's heavy themes, where does bowling fit into this?! This is, as Walter Sobchak would suggest, 'over the line'. 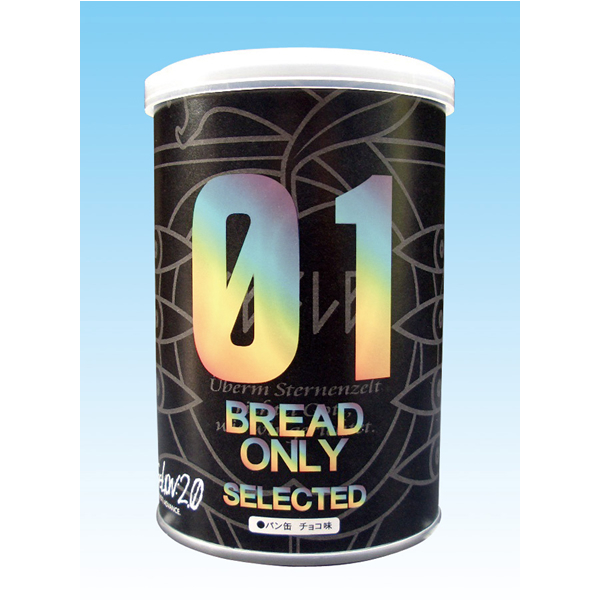 Well, here we have it. Canned bread.

I know Seele had some grand plans for the next evolution of mankind, but canned bread seems like a bit of a step back, if you ask us.

According the bakery, Pan Akimoto, this fresh bread keeps its deliciousness for three years! If you don't mind us, we're going to move our operations to Japan soon. Bandai have apparently done this before, releasing a Rei cake and even a Kaworu 'moon cake'.

Bandai have yet to release a Ramiel cake, which is a bit upsetting, but we can live with that for now, despite our feelings for Ramiel-chan. Want to find an engagement ring, but you're struggling to find the right one? Well, if they're a fan of Evangelion, U-Treasure have you covered with their Spear of Longinus engagement and wedding rings!

The Spear of Longinus has inspired forks, tweezers and picks, but fans were now able to spend four figures on a gold Evangelion ring, just so they could announce their love to their beloved and of course, giants robots.

I mean, we get it. If we were presented with a Evangelion wedding ring, we wouldn't say no. We are married to Misato, after all. You've got to hand it to the people behind these products. Sure, sometimes we may be rather confused by Evangelion canned bread, but at least this a practical idea! Evangelion rations!

This past year has been crazy, so it's better to be safe than sorry with an assortment of NERV rations. There's no telling what's around the corner. Third Impact on the way? Get stacking those beef stew boxes already. 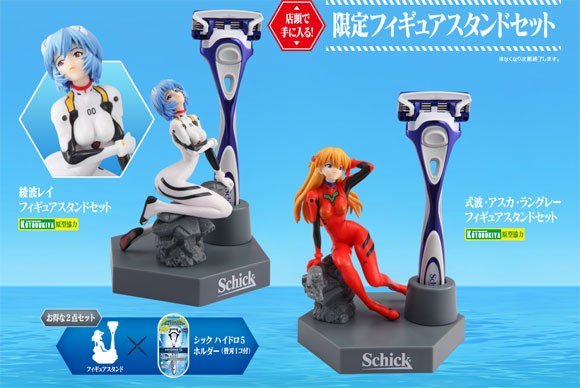 Japan has all the good stuff. One of Evangelion's biggest ad campaigns was for Schick razors, which had the great Gendo Ikari shaving off his beard in some of the promotional images. That Gendo guy is hilarious.

We would've preferred the beautiful Kaji, but hey, at least Shinji is in some of the same promos. He may have been abandoned for years, but now Gendo can reconnect by teaching him how to shave. Make this scene happen in the next remake, Anno.

Schick razors have Evangelion's imagery all over them, whether it be for the razor blades or the actual razors, you can expect to see even Mari's face on them (who?).

If you want somewhere to store your razors though, Kotobukiya and Schick have you covered with some impressive stands, featuring either Rei or Asuka posing on a rock. Hey, if you want, you can imagine Asuka's belittling you whilst you shave!

Sure, Evangelion has managed to tackle the fashion market in some wonderful ways, but the guys over at A.T. Field decided we needed boxer shorts.

Now, if you know the score about A.T. Fields, it just makes this idea even funnier. As we know from some of the earlier episodes, the only way to break someone's A.T. Field is by rubbing them together! Well, N2 mines also work, but don't get those anywhere near your butts.

Still, we loved the idea of A.T. Field boxer shorts so much, we decided to stock them! Yeah that's right, within a few weeks you'll be seeing some Evangelion clothing hitting the store. We've sold A.T. Field official merch before, so we've made plans to expand on the line with Eva Store products shipped straight from Japan. We just love the show that much and we personally think you deserve it.

If you want to check out some more official Evangelion products, check out Red Bard's YouTube video, 'Can You Live Entirely Off of Evangelion Merchandise?l'

Thanks for reading and remember to check back for further updates!